[edit: I am removing the photographs on the outside chance that they are not really the pictures of the piece of trash who is pulling this scam].

I don't normally "dime" people out on non-life threatening things, but this has really got me ticked off as it's someone who messed with MY family!
An older scam appears to be resurfacing....the Soldier that needs help going on leave to be with you. A cousin of mine was hit with this and luckily she started to question everything he was saying and the pics he sent.

The scam is, in some version, a long-distance relationship with an supposed Officer in [pick your branch]. He really wants to take leave to come and spend time with you, but he is on a "secret/underground/important" mission and can't get free (time off) unless he has a replacement. So, he needs you to send an email to some General/Colonel stating that you REALLY need him to allow your boyfriend to come home for leave for some emergency. Plus, he also needs money and after you write his leadership, you'll get a "bill" of charges for his leave to come see you.

The guy that tried to scam my cousin is: https://www.facebook.com/eric.mcdaniel.9615?fref=ts. He claims to be a USMA graduate, a CAPT in the 23rd Artillery Division (which isn't real). Says he is stationed at Red River Army Depot (but lives in California???), in this non-existent unit, sent my cousin a crack-head DoD ID card (looks more Chuck-E-Cheese), claims to be from Poland, Virginia, and/or England. Even worse, claims to be a hero/veteran. Pictures he sent her looked like UK/Aus/NZ uniform, although even those pics were wrong!

Also, his "official" Army email is an AOL address, which is NOT how the US Military does things, and his unit/CO email address is u.sarmytransitdepartment@usa.com, again, NOT a valid military address, at least to my knowledge.
One of the last correspondences (see below) that she got from him/his "unit" detailed the following:
"He is a Captain, 23rd Artillery Special Ops located in TX based out of Red River Army Depot.  Leave to be his house or my house.  Was told he just needed a darn good reason from family.  Says has almost 20 years in.  Army saying they need pay for flight and replacement officer.  Underground mission was mentioned once."

This guy is a SCHMUCK!!! ...to put it nicely.
Since there is already a lot of information on the web about this type of scam, I am not going to go into much detail. However, I would like to post some pics of the emails and pictures that my cousin received from this loser!
Emails from "his Unit Leadership" 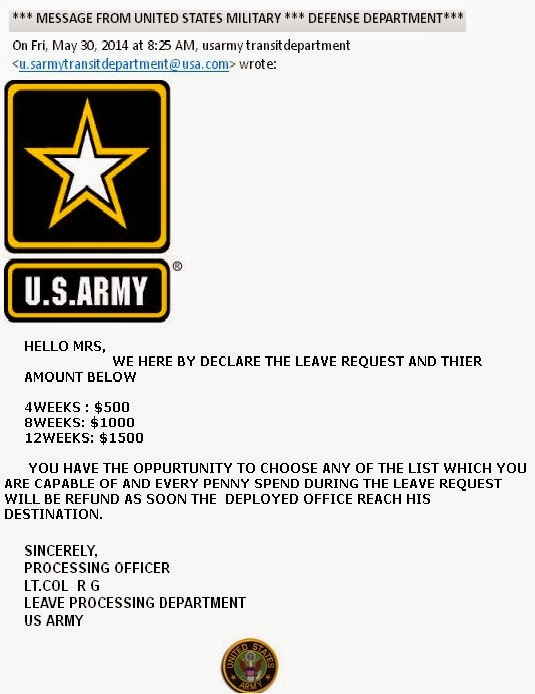 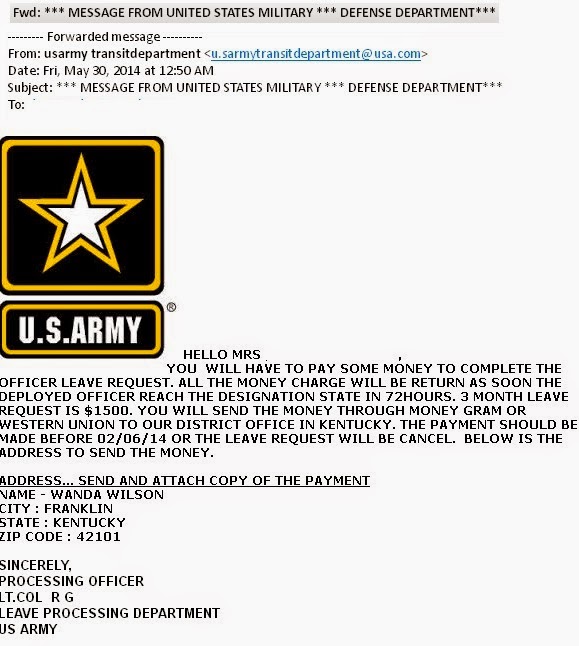 Of all the pictures he sent my cousin, one is my absolute favorite. He tried so hard to convince my cousin that this format was an alternate DEERs card!!! What a TOOL!!!!!!

Just wanted to add here that, after I read the records of my cousin's email and IM exchanges with this uber-tool, I am even more convinced that he needs, at least, a very large and long-lasting blanket party. In multiple messages he claimed to have "lost more men" during the previous night's "dangerous mission" outside of RRAD. It was obvious just part of his scam to try to get my cousin to worry about him and to try to get her to speed up the "leave payment" that his "unit" required. Jeez, I wouldn't mind whoopin' this boy one or two times!!!!