What is the Android Debug Bridge

The Android Debug Bridge, or ADB, is a command line tool that is part of the SDK. This tool utilizes a client-server model and provides a mechanism to debug, install and remove software, push and pull files, in addition to some other tools. These actions are performed against an emulator (via a daemon) as well as a hardware device connected to a USB port on the development box. While some options of the ADB can be performed via GUI tools (if the ADT set is installed in Eclipse), the ADB provides for a larger range of options as well as a smaller level of granularity.

As mentioned above, the ADB utilizes a client-server model as well as a daemon that is running on the target. Because of this model used as well as the protocols, it is important to have at least a minimal understanding of the architecture.


Both the client and server are installed on and operated from the development box. The server provides the framework for the client to be able to utilize resources (primarily files) on the development box and the device that the box is connected to, either an emulator or USB-connected device. Below are some quick facts about the connections and protocols:

Now that we have a basic description of the ADB and its architecture, let’s move into how to actually use the ADB. In this section the items covered will be: Navigating to the ADB tool, How to identify what emulators and/or devices are connected to the development machine, connecting the ADB to a specific device and, some Basic Commands.

Where is the ADB located

The ADB tool is located in the directory where the SDK was installed at, under the platform-tools directory. If using a Windows machine and following the installation guide’s examples, the path would be: C:\Program Files\Android\android-sdk\platform-tools


What Emulators/Devices are available to connect


To get a list of devices that are currently connected the devices parameter can be used to produce a list of what is connected (Serial number in the format:


·         offline – the device was connected but has not finished initializing


·         device – The device is connected, initialized, and ready to accept connections


Entering the command:  c:\..\..\android-sdk\platform-tools\adb devices will give you an output similar to the below figure. Shown here are two emulators with their names and attached status.


The primary way to connect to an Android device or emulator is through the use of one of three command switches: -e, -d, -s


The -d switch is used with USB connected devices.


The -e switch is used to direct commands at the only connected emulator.  This would not work with the situation shown in Figure 1 above.


The –s switch is to direct commands at a specific serial numbered emulator, as shown in this command:


Success of this command is the returned command prompt:


The above example is requesting a command shell directly on the device with the serial number emulator-5554. This is the easiest and most direct way of connecting to an emulator/device through the use of the adb command. However, there are commands that are just as simple that allow a developer to push and pull packages and files and to install/update applications without the need to interact with the shell after execution.

The adb tools provide options for moving files, working with debugging logs,  scripting, and other basic Linux tasks that can be helpful in the development process. Presented below is discussion on these topics.

Push and Pull with ADB

As mentioned above the ADB tool provides single commands to push to and pull from and file from the emulator/device, to include the installation and removal of software packages. Some examples are presented this section.
The push and pull adb commands are similar in that they both require two parameters: the local path and file, and the remote location. The only difference is that of their order, which is dictated by the command chosen.


The push command “pushes” a file to the specified path on the emulator or device. The pull command “pulls” a file from the remote device and stores it at the defined local path. The general format of these two commands, that might help in remembering the order is that the first parameter the same question regardless of the command being push or pull. The second does the same. To put it another way, for the push and pull commands, the first parameter always answers the question: “from where” while the second parameter answer the question: “to where”. Examples of both of these:


The figures below demonstrate some examples of using these commands:


First, let’s use the below command to push a small text file I made called droidCommands.txt


The default directory when connecting to an emulator or device is “/”.  In Figure 3 below, I have verified the directory with the pwd command and then listed the directory to verify that the file I pushed did not get placed here. 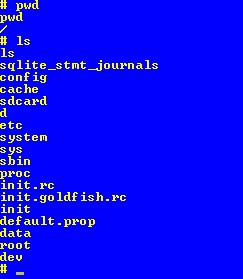 
In the push command, I specified the /data/data directory as the location to place the file. Below demonstrates the commands (basic Linux commands) that I used to verify the directory and file.

Figure 4: Verifying that file was pushed to proper directory


Pushing and pulling the same file can be a little boring, not to mention that it appears ambiguous. First, I want to check for any file that begins with “test” and then rename (Linux mv command) the file to testFileNew.txt.

Figure 5: Renaming the file to pull


To get a file from the device, the adb pull command is used as in the example below.

Figure 6: Example command of pulling the file from the emulator/device

As with other portions of the ADB that mimic options in the GUI, there is a mechanism to install a software package to the emulator/device. The command to install using adb is: install


Next, after downloading a copy of the Amazon MP3 application for Android, I run the install command to install the application into the operating system of the emulator:


After using the adb to install the Amazon MP3 application, we can verify that it was installed in two ways. First, we can list the application directory again: 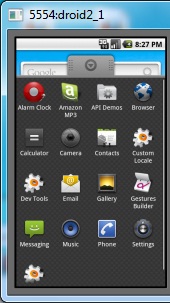 
Lastly, it is imperative to verify that the application actually works in the emulator. Otherwise, developers would be only able to verify the apps are working AFTER it was installed to an actual device. The figure below shows the installed application open and running. 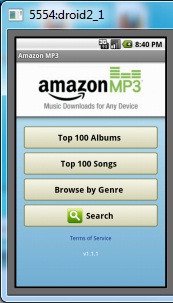 Figure 11: The application open on the emulator


The ADB debugger acts the same as the GUI instance of logcat. Using options and filters, it is possible for the developer to garner helpful information about the application they are working on as well as the device and other processes running. Of particular interest regarding the logcat tool is that it can be run from either the ADB command line, or from inside an active shell.


The basic debugging command in the ADB tool is:


Inside an active emulator/device shell, the command is:


The best description of this command comes straight from the Android Developers website:
[adb] logcat [] ... [


Here, option and filter-spec are both optional and can be used to create a finer granularity of the results in the logcat output. Because of the large number of combinations that can be used, I will only be demonstrating a couple of options that might be helpful to others.


First, the basic logcat command from the ADB command line:


The same logcat command run from inside the emulator shell:


As is shown, both outputs can contain a large amount of data in a short period of time (screenshots only show approximately 25% of the output that was captured in approximately 2 seconds).  Because of the verbosity of the output, the options and filters play a crucial part in narrowing the scope of the debugging information. Some of these options that I have found very helpful are:


The actions of options -c and -d should not be a surprise to any developer.  Options -f and -b can be very helpful in a quick fashion and -f can be used with any of these (and other) options. Some examples are presented here without screenshots.


-          Dumps the log to the given file. It’s important to note that you must have write privileges to any directory you are trying to write the data to if running this command in the emulator/device shell or in some versions of Linux and Windows machines used for development


As in the GUI, it is possible to change the different levels of verbosity of messages from the log. The logcat tool allows for seven different levels:
V: verbose
D: debug
I: info
W: warning
E: error
F: fatal
S: suppress

Any of these switches can be added to the options already mentioned. However, there is a specific form for using these levels, known as priorities. The priority is used in conjunction with a TAG in the format {TAG:PRIORITY}. The TAG represents where the line(s) in the log came from. An example of this would be Database, which would include any log line that contains that tag Database.


For instance, to get a logcat dump of only info messages and above (Info, Warning, Error, and Fatal) that were logged with the TAG ActivityManager, the following would be used:


To explicitly ignore all lines that do not match the supplied filter of ActivityManager and Info (and above), the S priority can be added as in the below example.


Note the usage of the ‘*’. This wildcard means “all” and will ignore any lines that do not match the filter.


The final item that needs to be covered is that of the format of the output. Through all of the examples above, the brief format is the default and is shown above in Figures 12 and 13. However, there are other formats that are available and have their definitive uses. The specify a format option for the logcat operation, the -v switch is used followed by a space and then a format choice from the below options:


Using the last example, we can add the long format option to see the difference:


it is possible with dumpsys and bugreport to send the output to a file instead of the screen through the use of the redirect operator ‘>’ as seen in earlier examples. For example, to send the bug report to a file in the /data/data directory:

There are some other tasks that the ADB tool can perform. Although mentioned here, they are not covered in detail in this tutorial. These other tasks are: starting and stopping the server, forwarding ports (to include forwarding to a particular jdwp port, using a PPP over USB tunnel, and generating a full debug report.

There are a large number of locations where a developer can get assistance with using the Android Debug Bridge.  The quickest location is the command line itself:


In the emulator/device shell help can be found for logcat as well:


Although a search using your favorite search engine will produce a large number of viable help options in terms of articles and blogs, the best place on the Web to start is on the Android Developers site itself:


http://developer.android.com/guide/developing/tools/adb.html
Posted by DetroitDave at 1:33 AM